You are here: Home / Fishing Apps

Fishing Quiz 101 – What are the three most important questions to answer for you to successfully catch fish? 1)Where to catch what kinds of fish?, 2)When’s the best time to catch those fish? 3)What’s the best bait for that spot and species to catch those darn fish?

Unless you’re willing to spend years learning those answers (which is why so many anglers drop out after a year or so of not catching much) you might consider using the rest of the “connected” fishing world and a few clicks on your Smartphone to begin catching more fish right away… by using one of these fishing apps!

is the world’s largest community-based fishing app. It allows anglers to upload catches, 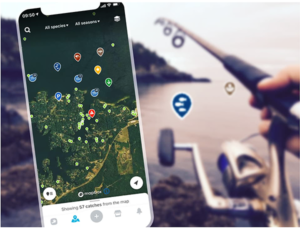 fishing reports, and observations viewable to just themselves, their friends and family, or the community at large. Anglers can also view reports and catches from other anglers in their areas to figure out where fish are biting. So it’s a great tool for fishing clubs or groups of friends to help each other out and learn. It’s also an excellent tool for anglers looking to get some experience, as it will allow them to view catches and reports from more experienced anglers. Plus, it has lots of information available about baits and techniques, so it’s an excellent resource for anglers that want to try new techniques. Heck, there’s even a free version for both IOS and Android.

The GoFree Hooked app allows anglers to record catches by their GPS location, save fish photos, fish details, and notes about each catch. Once saved, it allows you to share that information with friends, family, and social media. It also allows you to

compete in “Tournaments” with other users or fishing friends to see who the best angler is via the live leader-board. By analyzing past trips results, the GoFree Hooked app allows anglers to quickly and easily break down patterns and predict future success. It also creates an atmosphere of competition, so anglers can try and better their performances each time on the water.

The Navionics app gives the angler on-the-go access to the same great charts contained in most high-end GPS units. Want to pore over the map to find a secret honey hole at dinner after a long day on the water, or when it’s raining outside? The app allows anglers access from anywhere. It’s also excellent for anglers without GPS capabilities in their boats, but who have smartphones. It works like a GPS. The Navionics app is also great for ice fishermen, who seldom have GPS capabilities while on the ice – it puts the contour map anywhere you are.

The Fishidy is a free mobile app (Android, iOS) works in conjunction with the Fishidy website to provide users with a way to save and record their favorite fishing sites and catches and share them with other users. The app provides fishing maps to more than 17,000 waterways, with users able to log catches and favorite sites on the map. In addition, Fishidy includes social features with users able to share information with other anglers and friends, as well as view a feed of current activity and reports for individual waterways.

The Orvis Fly Fishing app (Android, iOS) comes with a ton of useful information for fly fishers. The app includes instructional videos on a variety of casting techniques and common errors, a fly fishing glossary, a searchable guide to the top 100 trout flies, fly-fishing podcasts and fishing reports for more than 200 fly fishing destinations in North, Central and South America as well as the UK.

If you fish, you’re going end up tying knots. And mobile apps like the Knot Guide iOS app provides users with detailed information about more than 100 knots, divided into 18 categories, including binding, climbing and sailing knots, and most relevantly for us, fishing knots. Users can explore knots by name or category, and each entry comes with a description of its uses, as well as a visual guide to tying the knot. Users can save their favorite knots, as well as read up on knot-tying lingo, as well as share their knot-tying work with other users.

Click here to "net" all kinds of online resources on where and how to catch fish, and what gear to consider.  Plus we added some games for fun and to get you excited about the real deal.

Click here to watch some cool kids fishing videos. Email us your video links at info@kidsfishing.us and we'll consider sharing with the kids fishing world.

Click here to explore our fishing photo gallery. Also find out how to email us your pics at info@kidsfishing.us